There are two proposals for St Martin's and details for each of these are included below. You can also download images of the design proposals for Lower Town Beach on the right hand side. A summary of feedback that we've received for these proposals can be found through this shortcut.

At the western end of Lower Town beach, the beach-side of the dune is eroding, and the beach access ramp is unstable. The telecommunication cable has become exposed as the dune has eroded and there are some points where informal tracks through the dune onto the beach are likely to lead to ‘blow-outs’ of sand and erosion by waves during storms, as happened in 2014. A well-vegetated dune with complete plant cover is much better able to resist eroding waves during storms.

We propose to install fencing along a section of the dune for a length of approximately 67.5m. This will allow for the natural recovery of the dune. Information boards will be installed to explain why this area has been fenced off and to encourage people to use alternative access routes to and from the beach. The beach access ramp will be formalised by using an open grid product that can be filled with aggregate. This will help to limit the further lowering of the crest level at the ramp. 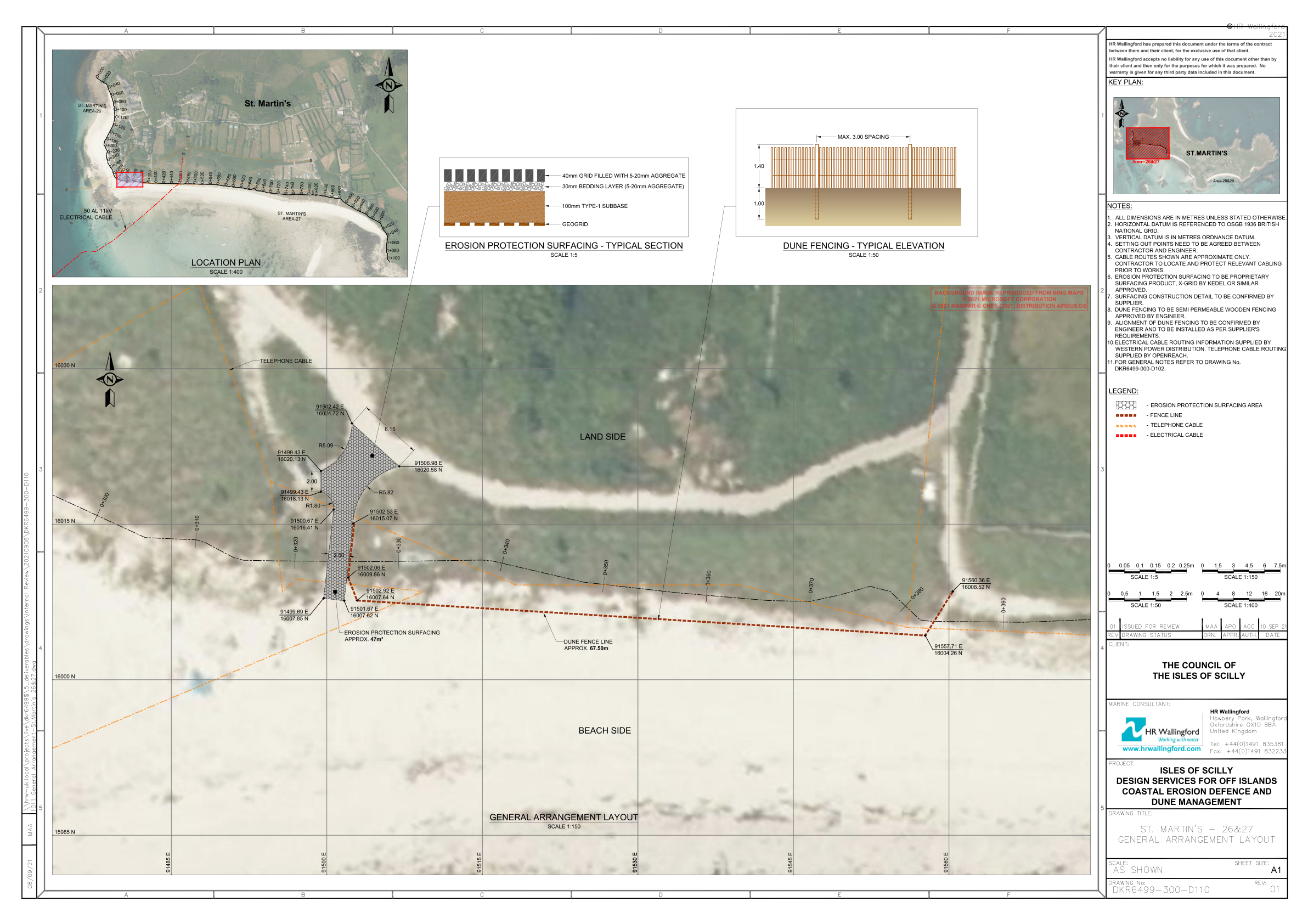 At Higher Town informal access tracks to the beach at various places are killing the dune plants, which leads to the dune being prone to ‘blow-outs’ of sand and erosion by waves during storms, as happened in 2014. A well-vegetated dune with complete plant cover is much better able to resist eroding waves during storms.

We propose to install information boards to explain why this area has been fenced off and to encourage people to use alternative access routes to and from the beach. We think installing sand ladders would be helpful if St Martin’s residents feel that access should be provided down the face of the dunes.

Thank you to everyone who submitted feedback on the proposals for St Martin's. The responses have all been helpful and will inform the project going forward. There were a range of questions that have been summarised, with answers, below.

Is there a less visually intrusive alternative to a fence? For instance, post and rope, plus information boards?

The aesthetics of the fence design has yet to be finalised, but visual impact will be considered. Post and rope is ineffective at trapping sand, which is most of the aim of the fence. Information boards are being considered, along with other approaches to communicate these issues to key people such as visitors.

Will the slipway project out on to the beach as shown in the designs?

No, we’ve taken on board feedback provided by slipway users and we’ve asked the designers to recess the slipway so that the toe of the slipway is aligned with the front of the dunes and does not project onto the beach.

The slipway is used to launch a lot of boats so is the slipway strong enough?

The design engineers have been told what mass the boats and trailers currently using the slipway are, and the number of axles on those trailers. They are designing the slipway to cope with these loads.

Will there be replanting of marram grass?

Marram grass should re-establish quickly. Replanting marram grass is not currently in the plans.

Are there plans to remove boat, kayaks etc that are just left in the dunes?

When boats and kayaks are left in the dunes, the foot traffic can lead to dune erosion. We’d like to encourage this foot traffic to reduce, to protect the dunes – one of the key defences against coastal flooding. We’d like to talk to the community about how this can be encouraged.

On Par Beach at Higher Town, where will the fencing be placed?

The proposed fencing area at Higher Town would just be in sections that appear at the most risk of erosion, such as informal access points.

Could you provide an example of a sand ladder?

The rope ladder proposal is only for access at the eastern end of the beach. The proposed rope ladders would have a design similar to these in New Zealand - https://www.boprc.govt.nz/media/289150/coast-care-brochure-5-web.pdf. If access using these ladders would be difficult then there would still be the main access to the beach at the western end. We have money to maintain works for some years, and the council can seek additional funding in the future to continue to maintain them.

Are blow outs really a problem at Par Beach?

The form of the dunes shows that ‘blow-outs’ are an ongoing hazard. They occur today around the access tracks in a minor way. We’re trying to prevent this becoming more of a problem in future. Significant weak points can cause an issue in a big storm because if seawater gets behind the dune it can flood down to the groundwater body.

Would you be able to look at the Old Quay and the east end of Lawrence’s Bay?

Under the Shoreline Management Plan this stretch of coast is designated as no active intervention, with realignment of tracks expected to occur as required. The east end of Lawrence’s Bay and the Old Quay are not included in this project, so no work will be carried out here.

If you have any further questions about the proposals for St Martin's please get in touch with us at adaptivescilly@scilly.gov.uk.

Protection of Your Personal Information

The Council of the Isles of Scilly will use the personal information you provide to help it understand and respond to your feedback. By sending in an email to us in response to these site proposals you are agreeing for your information to be used in this way.